Open Letter to All Citizens Who Love the St. Lawrence 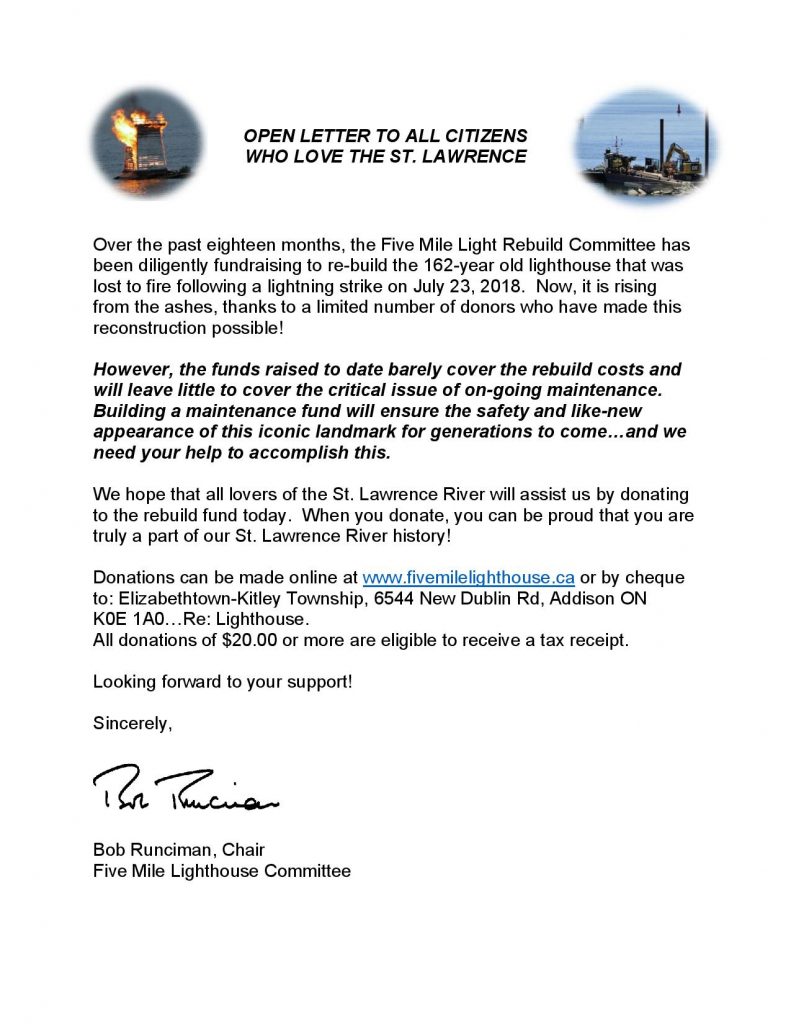 Less than sixteen months after the historic Five Mile Lighthouse burned to the ground following a lightning strike, the rebuild of the iconic structure is on the verge of starting.

Although we’ve met our original fundraising goal with Burnbrae Farms Foundation matching $30,000 in donations, our engineering team expects the high water levels to impact the ultimate cost of restoring/rebuilding of the foundation.

As a result, the committee continues to encourage donations to ensure that complete costs will be covered and that a modest long term maintenance fund can be turned over to the township.

The Burnbrae Foundation will be providing a generous donation of $30,000 in their pledge to match donations.

Winner of the VIA Rail Canada package to Halifax

A VIA Rail package worth $5,300 (compliments of VIA Rail Canada) was awarded to winning bidder, Erin Johnson of Ottawa, at the close of the Five Mile Light Fundraising Auction held recently. 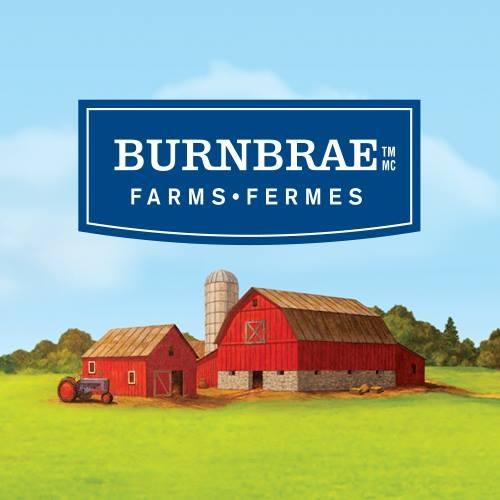 Burnbrae Farms Foundation will match, dollar for dollar, all future donations up to $30,000. 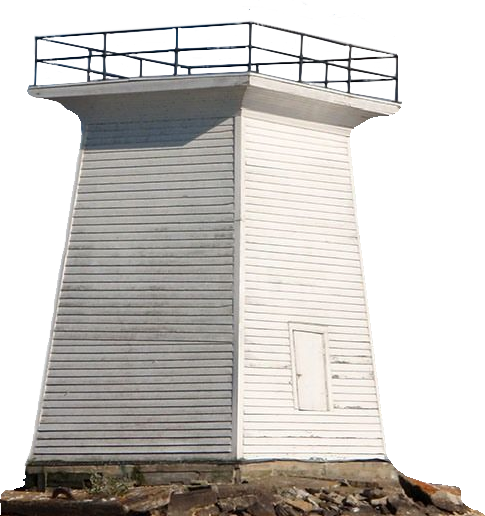 We are a citizen’s group dedicated to preserving our local marine heritage.

In partnership with the Township of Elizabethtown-Kitley, we have established an ad-hoc Committee with a mandate to raise the necessary funds to rebuild Cole Shoal Lighthouse, better known as Five Mile Light.

We are asking for your help. Our goal is to raise $200,000 to rebuild the structure and provide future maintenance.

Through your donation, you will be part of history in replacing this iconic landmark .

Five Mile Light was one of the last remaining and oldest wooden lighthouses of its era. It was significant as a surviving example of a mid-19th century square lighthouse.

With the advent of the river steamer in the mid-19th century, there was a greater need for lighthouses along the St. Lawrence River. By the 1850s, a series of nine small lighthouses of similar design had been established.

Active for 70 years, this string of lighthouses were critical in helping nighttime shipping vessels to navigate a dangerous stretch of the river. 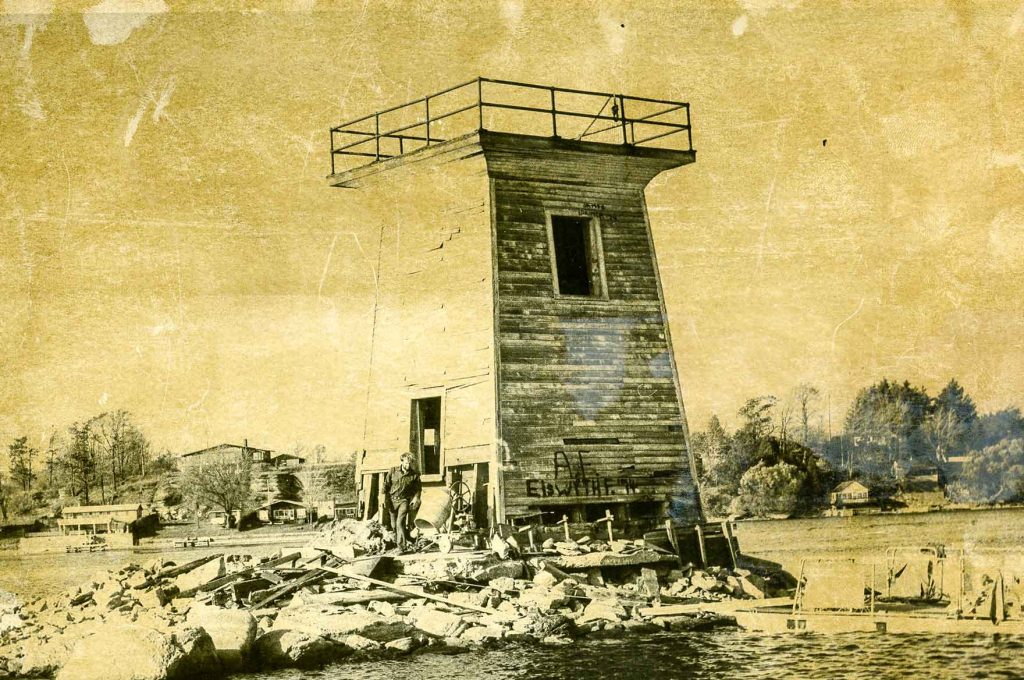 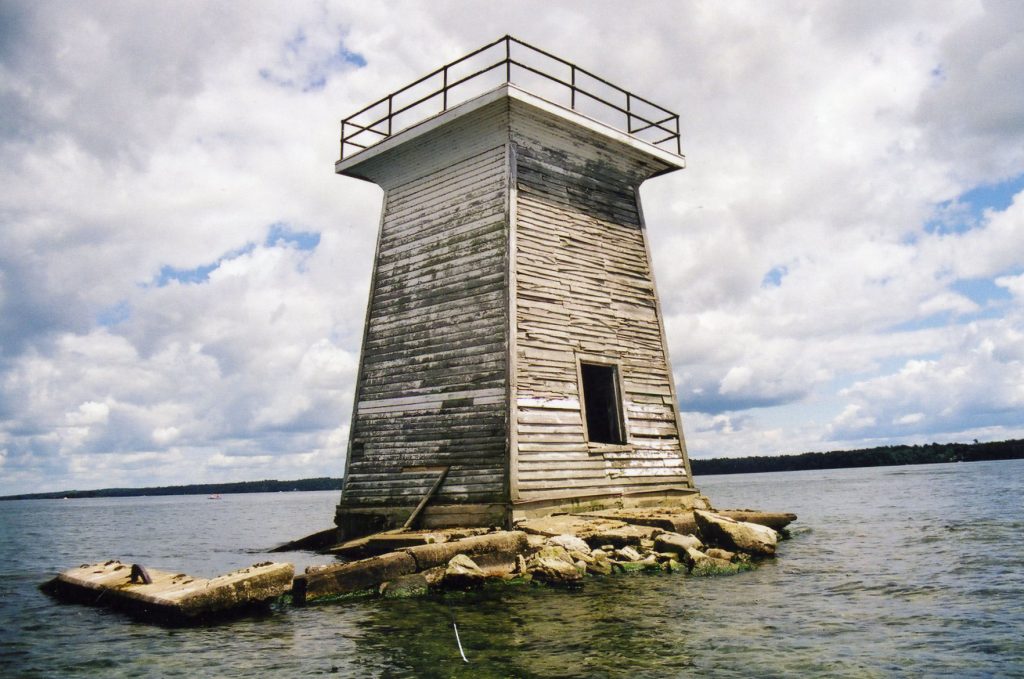 On the evening of Monday, July 23, 2018, the Five Mile Lighthouse on the St. Lawrence River at Cole Bay was struck by lightning.

While it stood the test of time for 162 years, one bolt of lightning lead to its rapid demise. The lighthouse burned to its foundation.

Video courtesy of  IN Engineering

The lighthouse structure will be almost identical to the pre-fire structure to satisfy provincial reconstruction permits.

The Committee will abide by the Elizabethtown-Kitley Township official RFQ process and all financial transactions will be in accordance with the Township’s Procurement Policy.

Updates will be posted on this website as well as in our email newsletter.

We are asking you to help us rebuild the Five Mile Light.
Thank you for your consideration in being part of St. Lawrence River history.

Donations of $20.00 or more are eligible for a tax receipt.

OTHER WAYS TO DONATE

In Person or By Mail

You can donate by cheque or cash to the Township
of Elizabethtown-Kitley.

Download this form to get a tax receipt if your donation is $20 or more.

Please email us at donate@fivemilelight.ca